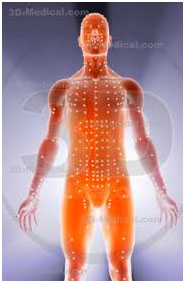 Physician, Dr William Clearfield is also an Acupuncturist in Reno NV.  Medical Acupuncture, a contemporary take on an ancient Chinese system of medical diagnosis and treatment, encourages the body to promote natural healing and improve function by inserting needles, applying heat or electrical stimulation at precise anatomic junctures by a licensed Reno Acupuncturist.

In Western cultures, acupuncture is noted mostly for acute and chronic pain relief.  According to the World Health Organization, however, more than 40 conditions are amenable to acupuncture therapy. (1)

(We’ve subsequently identified this point as Yinlingquan or Yin Mound Spring, Spleen 9.  Located on the lower border of the medial condyle of the tibia in the depression posterior and inferior to the medial condyle of the tibia. Yin Mound Spring traditionally is needled for draining dampness from the lower abdomen, treating chronic yeast infections, knee pain, hepatitis, jaundice, any type of swelling and has an internal pathway to the neck and shoulder.) (2)

Our Hero returned from the battle excitedly relating his story to the village Medicine Man.  Terms equivalent in English to “absurd, lunatic, and crazy person,” were attributed to the Warrior.

A Second Warrior, also suffering from frozen shoulder, an occupational hazard apparently in bow and arrow China, expressed interest and demanded the Medicine Man “treat” him in a similar fashion.

Second Warrior shrugged, ignoring the sarcasm, drew an arrow from his bag, and presented it to Doc.  Doc eyed it warily, then shrugged.

In the caste system of the day, Warriors rated well above Medicine men.  A Medicine Man did not defy a Warrior.

“Doc” plunged the arrow into the area of the leg of the original warrior’s wound.

“It was the longest thirty seconds of my life,” Doc said later.

Second Warrior cried out in pain, clutched his knee, then slowly, began rolling his shoulder.  A new “medicine” was born.

“You know I was hurtin’, Second Warrior said, winding his shoulder in a larger and larger circle with a only a slight grimace.

Over the next several millennia, through trial and error, the tools available at the time, bone, rocks, and eventually twigs, collectively called “Bain,” were shaved to a point then inserted superficially under the skin. Doc discovered dozens of spots, or “points” when “arrowed” relieved a wide variety of ailments.

Bain gave way to refined, slender threads or “needles” made of iron and steel.   Today we harness a beam of light, a laser, to perform the same function as the arrows of yesteryear.

Needling single “points” led to an elaborate pre-scientific system based on Taoism.

Taoist philosophy advocates a life of complete simplicity.  Naturalness and non-interference with the course of events in order to attain an existence in harmony with the “Tao, “or “life-force” is its’ guiding principle.

In Taoist parlance the life force divides into two equal, competing entities. “Yin,” is a negative force, dark, cold, wet and feminine. “Yang” is the positive opposite; bright, powerful, fiery, and masculine.  The interaction of these forces determines the destinies and fate of all creatures and things.  Life revolves around the balance or imbalance of power between these two forces.  Acupuncture’s origin was a mechanical mechanism to bring the “yin and yang” of the body into harmony with Tao. (3)

Acupuncture treatment entailed placing solid objects into “points” on the surface of the body which affect the life force, energy, or “qi” of the patient. A healthy patient’s qi flows easily. Dis-ease arises when qi is distributed unevenly, either unbalanced in excess (mania, for example), or unbalancd due to a deficiency (depression).

Acupuncture and moxibustion are the therapeutic mainstays of Traditional Chinese Medicine. The Nei Ching explains the physiology and pathology of the human body, principles of diagnosis, prevention and treatment of diseases, holistic concepts, the viewpoint of development and change, and the relationship between the human body and nature environment. This is the theoretical foundation of Chinese medicine and pharmacology. (4)

Acupuncture migrated from China to Japan, Korea, and Western Europe as trade and transportation advanced and flourished throughout the world.  The “Canon of Acupuncture and Essential Points of Acupuncture and Moxibustion,” was compiled between 256 through 260 A.D.

With the opening to the West and its scientific principles, acupuncture fell in stature from the 1700’s until after the Communist revolution in 1949.  With hundreds of millions of citizens, mostly poor and uneducated, and little medical care available, Mao reversed course, ordering a massive education of “mini” or so called “Barefoot Doctors.” The Traditional Chinese Medicine “bizarre” superstitious weren’t so bizarre or superstitious after all.

Barefoot doctors were required to be high school graduates. They received three to six months of training at a hospital, then worked part time as doctors in their villages.  All told 150,000 doctors and 350,000 paramedics, a half a million workers, served over half a billion patients.

“Barefoot Doctors” utilized mostly acupuncture and local herbal remedies.  They were inexpensive, abundant and easily administered to a large population. (6)

In the United States and England, reports of acupuncture treatments surfaced in the early 1800’s.  Sir William Osler, the most famous physician of his era declared “for lumbago acupuncture is, in acute cases, the most efficient treatment.  Needles from three to four inches in length (ordinary bonnet needles, sterilized, will do) are thrust into the lumbar muscles at the seat of pain, and withdrawn after five or ten minutes. In many instances the relief is immediate, and I can corroborate fully the statements of Ringer, who taught me this practice, as to its extraordinary and prompt efficacy in many instances.”

Felix Mann, a German born acupuncturist, in 1962 wrote of the first known treatise on the scientific aspects of acupuncture, Acupuncture: The Ancient Chinese Art of Healing.

James Reston, a New York Times reporter, traveling with President Richard Nixon on his historic “opening” with China, in 1971, suffered an appendicitis attack. His surgical experience, including acupuncture for anesthesia paved the way for a new dawn for Chinese medicine.

The problem was, no one could explain how it worked.

In 1979 acupuncture skeptic turned believer, Bruce Pomerantz, Ph. D, at the University of Toronto, after reviewing the recently reported discovery of Beta-endorphin, published a series of studies measuring biochemical changes due to acupuncture input.

Dr. Pomerantz noted a rise in endorphin levels with acupuncture stimulation. By administering naloxone, a known morphine antagonist used to treat narcotic overdoses, endorphin levels in the acupuncture subjects declined with a subsequent increase in inflammation, reduction in wound healing, and resumption of pain. (7)

Acupuncture stimulation activates A-δ (sharp pain sensation) and C (dull pain sensation) afferent fibers in muscle, causing signals to be transmitted to the spinal cord. Endorphins dynorphin and enkephalin (but not Beta endorphin) are released. These afferent pathways signal the midbrain, triggering a sequence of excitatory and inhibitory mediators in the spinal cord. Neurotransmitters serotonin, dopamine, and norepinephrine are released onto the spinal cord leading to pre and postsynaptic inhibition and suppression of the pain transmission. The signals eventually reach the hypothalamus and pituitary triggering the release of adrenocorticotropic hormones (ACTH), adenosine, serotonin, dopamine, and Beta-endorphin. (8)

Dr. Pomerantz’ subsequent experiments revealed a 30-minute window between the time acupuncture needles are inserted and the endorphins are released to affect the body. (12)  This provided a framework for the proper timing of an acupuncture treatment.

Dr. Pomeranz also reported on the cumulative effect of endorphins. A single treatment might be mildly effective, a second potentiated the first. The third treatment results in an even stronger response than the first two. (9)

A latter day refinement of Dr. Pomeranz experiments questioned whether, in the presence of chronic pain or low level inflammation, midbrain signals were too weak to release their chemical mediators.  Acupuncture jolted the proprioceptive nerves “jumping” the signal threshold and stimulating the midbrain to release its endorphins.

The signal, however, is short acting and needs to be repeated (i.e. retreated) until the injured nerve “memory” re-establishes its normal signal to the brain. (10)

The Definitive Answer: How Acupuncture Works

It is beyond dispute, at this time in history, that inflammation, especially chronic, low-grade inflammation, the body’s reaction to infections, toxins and other threats, is the underlying common denominator of chronic disease. (11)  Obesity, diabetes, heart disease, cancer, and neurodegenerative diseases all result in response too constant, low lying noxious stimuli. (12) Research shows that all chronic disease has a significant inflammatory component. (13)  Interventions that suppress the development of chronic low-grade inflammation are a great advance in addressing these diseases. (14)

It is also beyond dispute that acupuncture positively affects inflammatory mediators activated in the presence of chronic inflammation. (15)  I presented my findings that inflammatory inhibition is the mechanism of acupuncture at the 25th Annual Symposium on Medical Acupuncture, on April 7, 2015. (15)

Acupuncture has a long, controversial history due to a lack of understanding of its underlying mechanism of action.  At times its’ acceptance or rejection was written in the political winds.  Some in the “scientific” medical community closed mindedly declare that no amount of proof will ever satisfy their opinion regarding acupuncture’s efficacy.(19)

A systematic review of the literature clearly debunks this notion and in fact demonstrates, on a cellular level, acupuncture’s healing properties mimic Western medicine’s most powerful biologics. (20)

In 1988 I established the Weight Loss and Exercise Clinic at Nesbitt Memorial Hospital in Kingston, Pennsylvania.  Medifast, a protein sparing modified fast regimen was the mainstay of this program. Upon graduation, many patients reverted to their old ways and quickly regained the weight they’d lost.

Frustrated, but undaunted, I found, in a used book store, an English version copy of “The Yellow Emperor’s Textbook of Internal Medicine.”

The “Yellow Emperor,” considered the fount of all wisdom, explained in exquisite, flowery detail, the art of food and exercise combinations and compatibilities within in a constitutional structure.

Chi Po, the Emperor’s scribe, recorded the Emperor’s wisdom.  Chi Po’s writings became the final arbiter in Chinese Medicine. Fascinated with the ancient, yet instinctively common sense philosophy of the Yellow Emperor, I recognized the value of this ancient text translated into simple, everyday language.

Not satisfied with adapting the Yellow Emperor’s philosophy to his weight loss clinic, in 1991, I enrolled in UCLA’s Acupuncture for Physicians program.

In 1992 I authored “Celestial Stems: Five Element Diet and Exercise Program,” based on the writings of Chi Po, and my experience at the Weight Loss and Exercise Clinic at Nesbitt Hospital.

With a healthy interest in aesthetics, anti-aging medicine, and women’s health issues , As an acupuncturist in licensed in Reno, I frequently incorporates Medical Acupuncture in treatment regimens customizing a plan that optimally is suited to each patient’s needs and desires.

Call today at 775-359-1222 or email us at doctrbil9@gmail.com for the latest in cutting edge anti-aging medicine.  Though an ancient art, I fail to see how any physician can operate without any knowledge of Medical Acupuncture.

Please pass this on to friends, loved ones or colleagues.  We specialize in solving seemingly intractable problems.